This is a post for whoever thinks we have an easy life, for whoever out there is thinking, Mick and Isabel, how lucky are they, living on a boat, not working, what a life!

You know what we have been doing during the last three weeks since we arrived in Sint Maarten, no, we haven’t been working on our tan and lazing around enjoying drinks with umbrellas in them, we have been working, working and working a bit more on our boat. It doesn’t matter how much you read about how hard it is to maintain a boat, you need to own one to really experience how many endless jobs seem to appear every day.

Some are priorities, like fixing things around the engine, others can be done at a later stage, like polishing the gel coat of the boat, but they are all important and necessary and guess what; they are all done by us.

This is not a post for me to complain. It is just an informative post for everyone that is interested in all the improvements we are doing on the boat. So here we go:

Our boat has a bimini but it’s in a pretty bad condition and it’s probably too tall as the boom gets stuck on it on certain tacks. So the first thing we did when we arrived was visit all the different canvas makers and get quotes for a bimini and also a dodger. We thought that they would do the canvas work and also the frame for the dodger, but they said the frame part was on us, so we went around trying to get quotes for a frame but everyone was too busy.

The next resort was building the frame ourselves. Mick did a bit of research on youtube and learned how to make a pattern to be able to bend the metal tubes for the frames. We spent two whole days at this dock near where we had the boat anchored trying to bend these tubes correctly. After a lot of heartache, swearing, sweating and the rest, we got the frame done and luckily the canvas maker “Ernest” was happy with it as well. Now we are just waiting for Ernest to do his part of the job and once the new bimini is installed, we’ll be working on getting the 4 solar panels permanently placed on top of it.

Simpson Bay Yacht Club. People gather to watch the super yachts get through the bridge 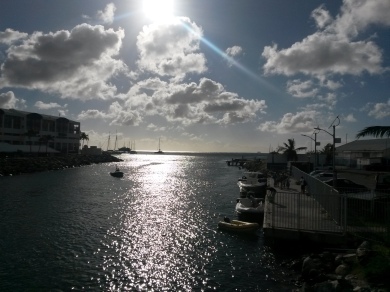 Fireworks at the lagoon

The bridge on the dutch side

those are the metal tubes we bended.

While this was happening, Mick noticed a small oil leak in the engine. He tried to figure out what was wrong with the engine, but because of all the previous problems with it we decided we needed some professional help.

So off we went on our dinghy, from one place to the next, trying to find a good diesel mechanic. They were all busy so we finally went to one of the big companies called Simpson Bay Diesel. They sent a mechanic on board ($85.00 an hour!) and he said that it was a simple thing, that he just needed to go and get an o ring and he’ll be right back. An hour passed and nothing. Then we get “the phone call”. “ Hi, yes, the mechanic has been working on your part but it’s a non serviceable part, so for a new one, you’ll have to pay $600.00!!!!! I could see sparks coming from Mick’s brain and his face turning red. Oh, oh, this is not good news, I thought. Mick told them to just bring the old part back to the boat and he’ll figure out what to do with it. Of course, they had pulled the piece apart and they were saying it wasn’t good anymore. We didn’t here from the mechanic any more that day but they came back the next morning and put the part back in the engine. It still leaks and now is worse than before, but luckily we’ve found the part on ebay for half its price and it’s on its way now from somewhere in New York state USA.

Then, while this is happening our outboard engine starts to go really really slow. That’s been a whole new job to start, trying to figure out what’s wrong with it. We’ve changed the propeller, put new sparkplugs in, new fuel filter, cleaned the carburettor and it’s still going slow !!! so tomorrow we’re going to try and find this mechanic and see what he has to say about it.

In the meantime, I’ve been working on the boat’s floorboards. They had a few stains and were looking pretty worn out, so I’ve revarnished them and they are looking much better. We’ve also installed the wifi hotspot and the iridium go which will keep us a bit better connected to our families and friends and which also will give us access to weather information. Then there’s the wind gear. Mick’s been up the mast a few times to install that and also to change some of our halyard sheaves that weren’t doing so good.

Then there’s the wonderful growth we are getting under the boat for just sitting here at the lagoon for three weeks; little barnacles and a green beard. I started cleaning eat today and hopefully we’ll finish it tomorrow. Although I’m a bit reluctant about going down there again as we’ve heard someone has spotted a giant and hungry barracuda inside the lagoon and they say it’s a biter!

Mick up the mast 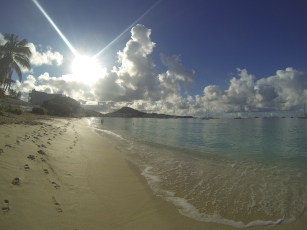 Having a few drinks with Elaine and Roy 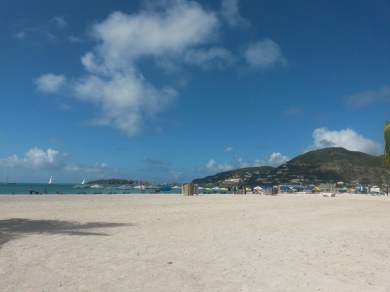 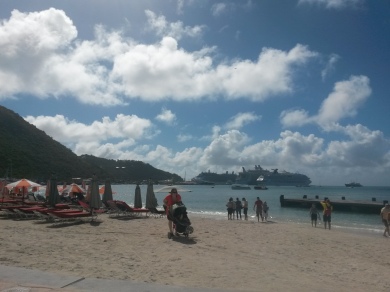 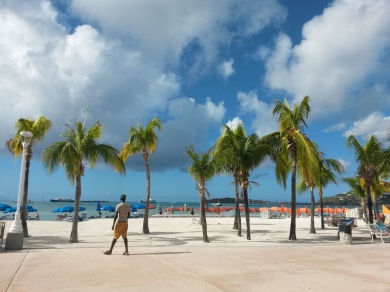 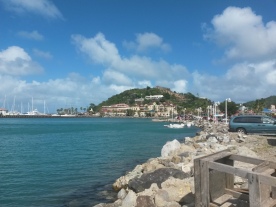 On our free time, Mick redid our cockpit table using a plastic product called starboard that will last longer than the first cockpit table we did out of cheap plywood, worked well and lasted 6 weeks!, so now we are going for a more durable material that will probably live longer than Mick and I.

Then there’s the water maker that Mick will put together himself. He’s been chasing out parts from all over the world. They are all here waiting for us in Aeropost, so we’ll pick them up tomorrow and that’s a new exciting project to start on. I’m trying to find calming herbs to dip in Mick’s tea and see if that helps with his overall performance or maybe I should drink them myself to survive these next few days hahaha.

The endless job list continues on. We have been meeting other cruisers anchored around our boat and going through not the same but similar predicaments as us. Some have said that it takes around two years to really get to know the boat and have it the way you want it (lots to look forward to !).

It’s good to share stories and /or dramas and laugh about it. I particularly enjoy sharing stories about our husbands’ new obsessions every day; like the day Mick spent the whole day checking the solar panels every 5 seconds looking at the input of watts and thinking there was something wrong with them. This went on for hours, going back and forward from the panels to the connections and checking it over and over again. While talking to our new friends the next day, we found out that her husband had been doing the same thing and that it had just being a bad input day due to cloud coverage!

So there you go, there are still plenty to do: the water maker, servicing the engine, waiting for the part to arrive and replace the broken one, installing the solar panels once we get the bimini, polishing the gel coat, buying more safety gear, setting the preventer and the port lifeline, getting some more chain, and the list goes on. We are thinking we still have around two weeks here in Sint Maarten, but who knows, by the rate things are going we might still be here by 2016.

A tropical family portrait back in early March. #tuamotu
"As above, so below, as within, so without, as the universe, so the soul"… ~Hermes Trismegistus~ #earthday 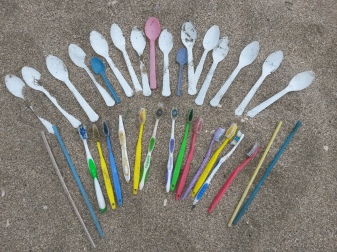 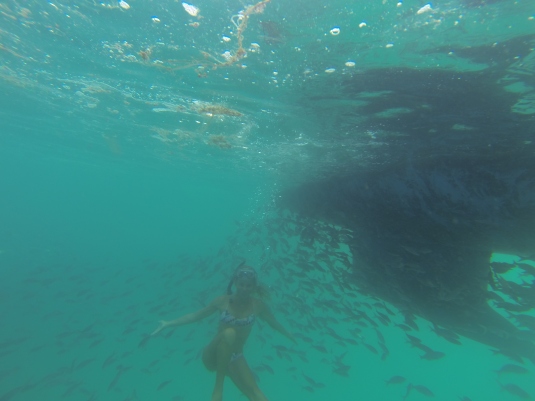 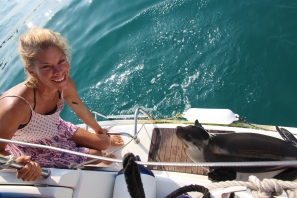 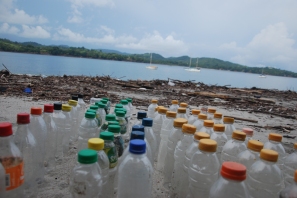 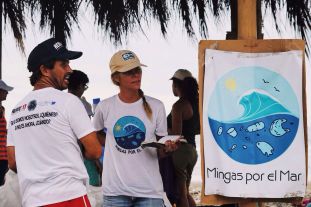 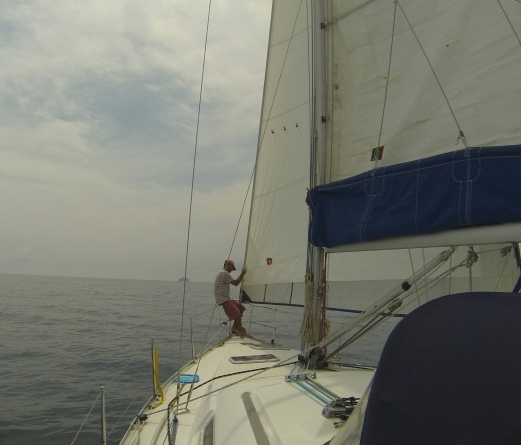 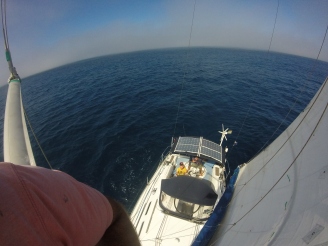 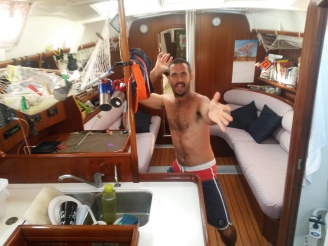